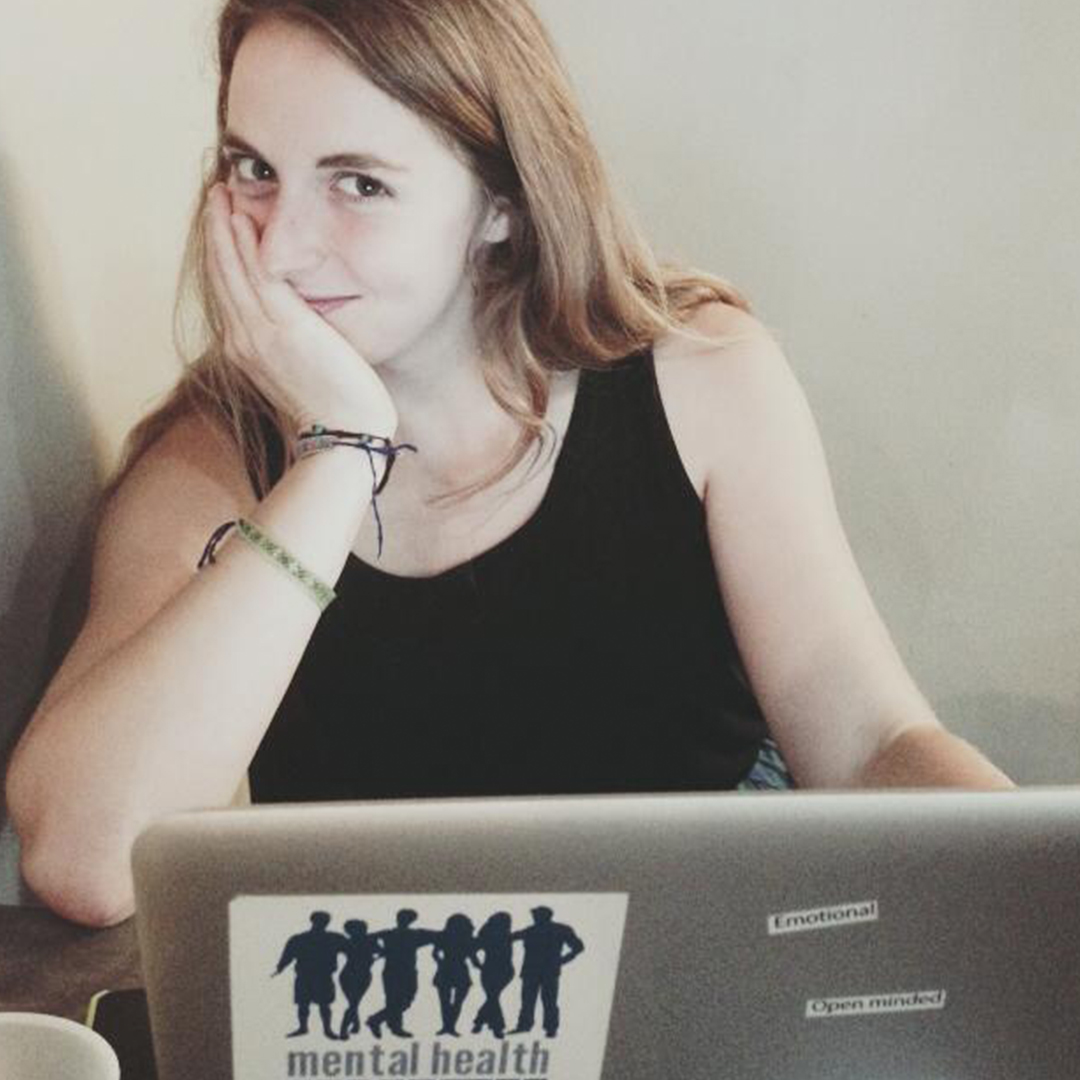 Community Voice:
Sarah Schuster
Mental Health Editor at The Mighty
At a Glance: The Mighty

Sarah Schuster is very open about her experiences with mental illness, talking with apparent ease about her journey with anxiety and depression.

But the mental health editor at The Mighty wasn’t always this way. There was a time when she was so ashamed of attending therapy she would lie about going to appointments and sneak around “as if [she] was having an affair.”

Wearing gym clothes as a cover, she would scan the area for people she knew before rushing into the counseling center on her university’s campus.

“I didn’t want anyone to how much I was struggling,” she says.

Gradually, she became more open about her mental health, even starting a blog and writing what she calls a “coming out” post about her struggles and going to counseling.

“I wasn’t very comfortable talking to my friends about the anxiety and depression I was going through, but I knew I would be able to write about it.”

Editor-in-chief Megan Griffo, whom Sarah had met at university, saw this blog post on Facebook and asked if she could use it on The Mighty, a website that publishes “real stories by real people facing real challenges.”

How do we work towards ending stigma?

I think that the only way to really eradicate stigma ... comes from changes in the mental health system and changes in education. Until mental health care is super normalized and accepted and accessible, I think that there’s still going to be barriers to people getting proper treatment and that keep people feeling ashamed. Education is the most powerful tool against stigma.

Launched in 2014 by Mike Porath, the father of a little girl with a rare chromosome disorder, The Mighty aims to help people living with mental illness and physical disorders and disabilities by providing a platform for them to share their stories.

Sarah wrote for The Mighty a few more times before graduating and taking a job with the publication editing article submissions. Later, when The Mighty had grown to the point where it made sense to have dedicated editors for each section, Sarah became the site’s first mental health editor.

No longer in the mental health closet, Sarah is passionate about helping others share what they’ve been through, too.

“Everybody deserves to have their story told,” she says. And not just for their own sake — when you’re struggling, hearing about someone else’s experiences can be very helpful.

“Worse than the thoughts themselves were the judgments that I would make about myself ... I’d have a thought, and my immediate reaction would be, ‘What’s wrong with me? Why am I thinking this? There must be something terribly wrong if I’m thinking this.’”

“Our experiences are unique, but they don’t exist in isolation,” Sarah explains. Knowing that can make the journey a little bit easier.

She uses an example from her own life, when she first began to have passive suicidal thoughts — “which is literally just thinking like, ‘I want to kill myself,’ when you don’t want to kill yourself.” The “bizarre” thoughts would pop up out of nowhere.

“What was worse than the thoughts themselves were the judgments that I would make about myself after I would have those thoughts,” she says.

“Having an explanation and also knowing that I’m not the only one who thinks like that, it just means so much.”

“I’d have a thought, and my immediate reaction would be, ‘What’s wrong with me? Why am I thinking this? There must be something terribly wrong if I’m thinking this.’”

Since opening up about these thoughts she’s learned the reasons why this kind of thing happens, and discovered that it’s something many people experience.

“Having an explanation and also knowing that I’m not the only one who thinks like that, it just means so much.

“Now when I have a thought like that I don’t have to judge myself, I don’t have to make it worse by really analyzing it, I can say like, ‘Ok, this is what my brain’s doing right now,’ and let it pass.”

The Mighty provides a platform for people to open up about things like this, and allows people to share their journey and experiences with a much wider audience than they would be able to reach otherwise.

“I love our contributors so much,” Sarah says. “We have this really, really great community of people who write for us, and my favorite part is getting to know them, interacting with them.”

Why is a sense of community and sharing stories important for people struggling with mental illness?

I think it feels good to read people’s stories when you’re reading it, but I also think the long-lasting effect is that then you’re a little more understanding with yourself, you’re a little less judgmental. We’re definitely more judgmental on ourselves than we are with other people ... I should have the same compassion towards myself as I do towards others. I think that shared experiences help you deal with your own experiences.

Many of these contributors are bloggers who see The Mighty as a great way to expand their reach, but plenty aren’t seasoned writers.

“Some of my favorite people to work with are the ones who aren’t writers.

Sarah sees herself as something of a translator for these people, sending edits back to them and working to make sure the writing is clear and tells the story they want to tell.

“I’m just there to make sure everything’s pretty, no typos, and I put it out there.”

“Our experiences are unique, but they don’t exist in isolation.”

Sarah finds people are very willing to share their difficult experiences with The Mighty’s audience of over 60,000, but the publication makes sure it’s flexible with attribution to accommodate people “at different levels in their journey.” A first name is all you need to provide if you’re uncomfortable being identified.

Either way, The Mighty’s following is very supportive. Sarah has been mental health editor for a little over a year and says the mental health community has been encouraging, welcoming and “very loving.”

Registering to join The Mighty allows you to personalize the type of content you see from the site by following bloggers and topics.

If you would like to see your work on The Mighty, submit your story for consideration.

When you have a chronic illness, feeling like you’re part of a community and knowing that you’re not alone in your day-to-day struggles is important.

Some voices in this community stand out as pillars of strength, always there to listen and offer words of understanding and encouragement. Their realistic but positive outlook has a way of empowering others.

NewLifeOutlook’s Community Voices project is our way of recognizing these people — and we need your help to do it.

If there’s a blogger, a tweeter, a YouTuber, a Facebook group creator or a forum moderator who inspires you to persevere in the face of chronic pain, fatigue and brain fog, we want to know about it — nominate them by contacting info@newlifeoutlook.com